SSPX OF THE STRICT OBSERVANCE 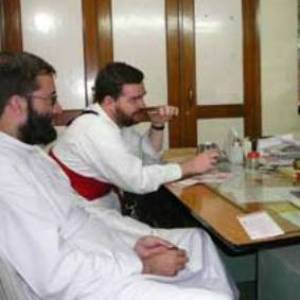 Frs. Francois Chazal and Joseph Pfeiffer Founding the SSPX of the Strict Observance
Based Strictly upon Archbishop Lefebvre’s Traditional Catholic Principles
Which They Say Have Been Abandoned by Bernie Fellay and His Neo-SSPX
Three Other Leading SSPX “Resistance Priests” Have Joined as Founding Fathers
Groups around the World Have Applied to Them for Help and to Offer Help


On September 21, 2012, the announcement came forth like the trumpet of the Apocalypse: a new Society of St. Pius X of the Strict Observance was founded on August 10, 2012, by the Vienna (Virginia) Declaration. The founding members are five leading priests of the SSPX. 25 more SSPX “resistance priests” have been identified so far and are expected to form the core of the SSPX-SO.
Described in the words of the Declaration as a “united core of priests faithful to the position always maintained by Archbishop Lefebvre,” Frs. Joseph Pfeiffer, Ronald Ringrose, Richard Voigt, David Hewko, and Francois Chazal, coming from various areas around the world, signed the founding documents. Joining the priests in the SSPX-Strict Observance are a number of SSPX religious and laity, to name just a few: Mother Ann-Marie Simoulin, Dom Thomas Aquinas (Benedictines of Brazil), and Dr. David White, who has previously given classes at the SSPX seminary in Winona, Minnesota.


The five founding fathers have elected Fr. Joseph Pfeiffer as their leader for a term of two years (compared to Fellay’s dictatorial 24 years). The fathers have refused to give up the name “Society of St. Pius X” because “we did not change the message; the official line of the [Neo-]SSPX has changed.” Although the founding fathers note that Fellay has not yet signed any “sellout deal” with Newrome, they publicly “withdraw the exercise of obedience to him for motives of Faith until this crisis is over,” in order for the priests to maintain obedience to God in their sworn Anti-Modernist Oath. Ironically, this was the same Anti-Modernist Oath to God that Fellay himself swore when he entered Major Orders with Archbishop Lefebvre.


In addition to the 25 other priests whom Fellay has expelled or threatened to expel from his Neo-SSPX, the SSPX of the Strict Observance has announced that it will welcome “all the priests that Fellay sends them” — sardonically referring to the nearly three dozen priests whom Fellay has expelled, with more to be expelled, from his Neo-SSPX. Frankly, it is wonderful to see that the SSPX-SO has a sense of humor, as Our Lord had so often in Sacred Scripture, instead of the dictatorial, autocratic, humorless Fellay, who is more reminiscent of the corrupt leader of the Jewish Temple, Caiphas, who persecuted the Lord and took a cut of the Temple treasury, or more reminiscent of Judas, who stole from the apostles’ purse and betrayed the Lord.


The founding fathers indicate that anti-Fellay groups have appeared from everywhere, calling for help from the SSPX-SO and offering help to the new organization. The fathers say that it is not easy to cast them out of places that do not belong to Fellay and that they now understand Fellay’s adamant machinations to take legal possession of more and more properties away from the local NSSPX groups. It may well be that Fellay brought in the Jewish fund-raiser and Dresden lawyer Maximilian Krah to give him legal advice on how to do this. The founding fathers are prudent enough to expect that the autocratic Fellay will unleash lawyers against them at some stage, but they say that they are prepared for this.


In a Declaration dated August 10, 2012, the founding fathers of the SSPX-SO stated that the Neo-SSPX crisis remains as long as its head, Bernie Fellay, teaches errors and allows errors to spread, thus dividing the flock. Fellay is “excusing” the Modernist Vatican II Council instead of rejecting it. This Council’s chief advocate remains Benedict-Ratzinger, who, the fathers state, is praising Vatican II continually, insisting that Mohammedans stay Mohammedans, preparing to Novus Ordo-beatify the successor of Josemaria Escriva (the Opus Dei cult leader), continuing to support the Focolari and other Modernist movements, et al.


The unCatholic teachings of the Modernist Vatican II Council are still raging in the person of one of its leaders, “Fr.” Ratzinger. Even if the “sellout deal” is off for the moment, Fellay remains committed to it. The fathers conclude by reminding Fellay’s Neo-SSPX of Archbishop Lefebvre’s direct words: “Had I signed [the sellout] agreement, we would have been finished in one year.”


http://angelqueen.org/2012/09/24/priests-break-away-to-found-an-sspx-of-the-strict-observance/
Posted by THE TRADITIONAL CATHOLIC FAITH at 19:42