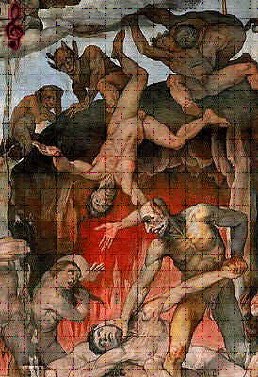 Email ThisBlogThis!Share to TwitterShare to FacebookShare to Pinterest
Labels: HOMOSEXUALITY

PHOENIX — It will be a special Christmas for the family of a 21-year-old University of Arizona student who was nearly taken off life support before awaking from a coma.

Sam Schmid was walking and speaking Friday at a Phoenix hospital. Dressed in a T-shirt, shorts and sneakers, he was able to use a walker and talk in brief sentences. 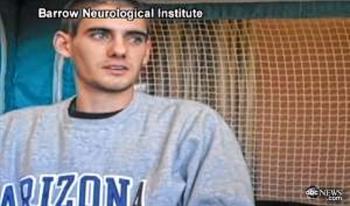 (The Arizona Republic, Deirder Hamil / Associated Press ) - Sam Schmid listens as Dr. Robert Spetzler, unseen, talks about Schmid’s brain injury during a news conference at Barrow Neurological Institute in Phoenix on Friday, Dec. 23, 2011. Schmid, an Arizona college student believed to be brain dead and poised to be an organ donor, miraculously recovered just hours before doctors were considering taking him off life support. Schmid was critically wounded in an Oct. 19 five-car accident in Tucson.
“Right now, I’m feeling all right ... except for the rehabilitation, I’m feeling pretty good,” Schmid said.
Doctors at Barrow Neurological Institute say Schmid has a long recovery ahead of him to regain full speech, balance and memory abilities.
Schmid was involved in an Oct. 19 car crash in Tucson that left him with a brain aneurysm, among other life-threatening injuries. Because of the complexity of his brain injury, Schmid was flown to Phoenix.
He underwent surgery performed by Dr. Robert Spetzler. With no responsive signs, staff discussed taking Schmid off life support.
“They never approached me to say would I donate his organs,” said Susan Regan, Schmid’s mother. “The people that were surrounding us were just asking about Sam, his quality of life, what would Sam want if we had to come to a difficult decision.”
Spetzler said Schmid was never officially classified as a potential organ donor. And after an MRI scan showed he wasn’t at a point of no hope of survival, Spetzler recommended keeping him alive for one more week.
Then on Oct. 24, Schmid shocked doctors by following commands to hold up two fingers.
“It may not seem like a lot to you,” Spetzler said. “It’s an incredible loop to show brain ability. That was like fireworks going off.”
Since then, Schmid has been spending his days in physical rehabilitation. Dr. Christina Kwasnica, who is overseeing Schmid’s rehabilitation, said he has gone from practicing sitting in a chair to doing rehab three hours a day. She described his recovery so far as amazing but hesitated to make any predictions of what “normal” would be for him.
“It’s so early in Sam’s injury. We have no idea where the ceiling is,” Kwasnica said.
While he will be able to spend Christmas day with family in Phoenix, Schmid will not officially be released until next week. His brother, John, based in Tucson, will relocate to Phoenix so Schmid can continue rehabilitation on an out-patient basis.
Schmid, who is a business major and was coaching basketball at a University of Arizona recreation center, is holding onto the belief that he can get back to what his life was like before the accident.
“I see myself leaving the house, going to school, work, basic things like that,” Schmid said. “I just want my life to be what it used to be.”
Copyright 2011 The Associated Press. All rights reserved. This material may not be published, broadcast, rewritten or redistributed.
http://www.washingtonpost.com/national/health-science/coma-patient-wakes-up-at-phoenix-hospital-after-nearly-being-taken-off-life-support/2011/12/23/gIQAFmIvDP_story.html
Posted by THE TRADITIONAL CATHOLIC FAITH at 12:50 No comments: