The Fellowship of the Believers


42 They devoted themselves to the apostles' teaching and to the fellowship, to the breaking of bread and to prayer.
43 Everyone was filled with awe, and many wonders and miraculous signs were done by the apostles.
44 All the believers were together and had everything in common.
45 Selling their possessions and goods, they gave to anyone as he had need.
46 Every day they continued to meet together in the temple courts. They broke bread in their homes and ate together with glad and sincere hearts,
47 praising God and enjoying the favour of all the people. And the Lord added to their number daily those who were being saved.

R. Give thanks to the Lord for he is good, his love is everlasting.

2. I was thrust down, thrust down and falling but the Lord was my helper.
The Lord is my strength and my song; he was my savior.
There are shouts of joy and victory in the tents of the just. R.

Praise to God for a Living Hope

3 Praise be to the God and Father of our Lord Jesus Christ! In his great mercy he has given us new birth into a living hope through the resurrection of Jesus Christ from the dead, 4 and into an inheritance that can never perish, spoil or fade. This inheritance is kept in heaven for you, 5 who through faith are shielded by God’s power until the coming of the salvation that is ready to be revealed in the last time. 6 In all this you greatly rejoice, though now for a little while you may have had to suffer grief in all kinds of trials. 7 These have come so that the proven genuineness of your faith—of greater worth than gold, which perishes even though refined by fire—may result in praise, glory and honor when Jesus Christ is revealed. 8 Though you have not seen him, you love him; and even though you do not see him now, you believe in him and are filled with an inexpressible and glorious joy, 9 for you are receiving the end result of your faith, the salvation of your souls. 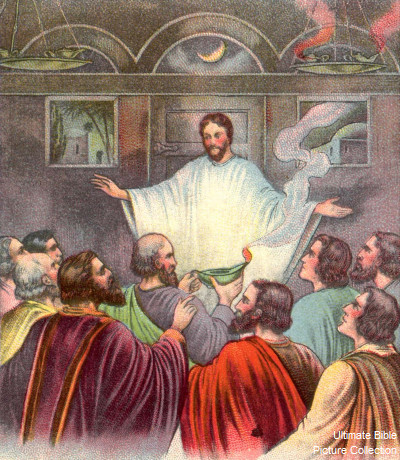 Jesus Appears to the Disciples
[19] On the evening of that day, the first day of the week, the doors shut where
the disciples were, for fear of the Jews, Jesus came and stood among them and
said to them, "Peace be with you." [20] When He had said this, He showed them
His hands and His side. Then the disciples were glad when they saw the Lord.
[21] Jesus said to them again, "Peace be with you. As the Father has sent Me,
even so I send you." [22] And when He had said this, He breathed on them, and
said to them, "Receive the Holy Spirit. [23] If you forgive the sins of any, they are
forgiven; if you retain the sins of any, they are retained."

[26] Eight days later, His disciples were again in the house, and Thomas was
with them. The doors were shut, but Jesus came and stood among them, and
said, "Peace be with you." [27] Then He said to Thomas, "Put your finger here,
and see My hands; and put out your hand, and place it in My side; do not be
faithless, but believing." [28] Thomas answered Him, "My Lord and my God!"
[29] Jesus said to him, "Have you believed because you have seen Me? Bles-
sed are those who have not seen and yet believe."